Dushica delighted with International Student of the Year award 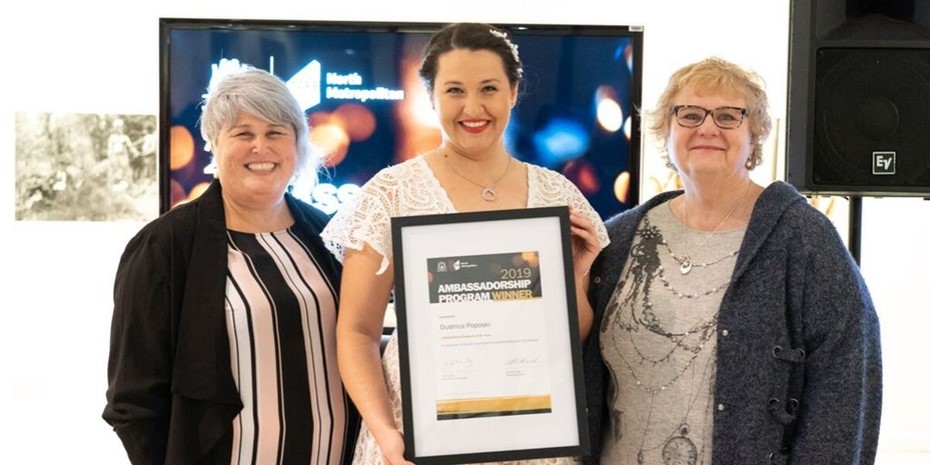 Dushica Poposki, a Disability Support Worker from Brightwater Oats Street Rehabilitation Centre was over the moon when she was awarded North Metro TAFE’s International Student of the Year on Friday night, after graduating as an Enrolled Nurse.

Originally from Macedonia, Dushica worked as a Registered Nurse, coming to Australia to challenge herself and excel her career in a new country. Unfortunately, Dushica’s diploma from Macedonia was not recognised in Australia, so she used this as an opportunity to re-hone her expertise and work on her English skills, with a re-ignited motivation to pursue her passion.

“In 2016 I started with Brightwater Oats Street as a Disability Support Worker, and later on, after finishing a Diploma of Community Services, I was offered a position with the Oats Street Community Team as a multi-skilled disability support worker.

Working with Brightwater Oats Street has given me an opportunity to work with people whose lives have been changed after their brain injury. I have gained my confidence working closely with people with an acquired brain injury and found my passion. I am glad to be surrounded by people who recognise my skills and knowledge which has given me the opportunity to be part of a research project and doing assessments with community clients,” said Dushica.

Over the last five years, Dushica has gained a certificate III and IV in Aged Care, a Diploma of Community Services, and Diploma of Nursing and now, is qualified as an Enrolled Nurse.

Dushica said, “being a winner of the Ambassadorship program for International Student of the Year Award will give me an opportunity to promote Western Australia as an education destination for prospective international students and to support them in their journey.” “Dushica is a highly valued member of the Oats Street Community team. I have admired her determination to study and achieve registration as an Enrolled Nurse, particularly when she has had to study in English, which is her second language. Her commitment to quality has led to an amazing achievement, and she is very deserving of the North Metro TAFE International Student of the Year award,” said Sally Willmot, Service Manager at Brightwater Oats Street.

We would like to take this opportunity to congratulate Dushica, not only for winning such a remarkable award, but for her ongoing passion, dedication and contribution to enhancing the lives of clients at Brightwater Oats Street Rehabilitation Centre.