Amy Orr, a resident of Brightwater South Lake, was treated to a wonderful party with family and friends to celebrate her milestone birthday.

The party was a lovely welcome for Amy too – who has only been residing at South Lake for just under a month. 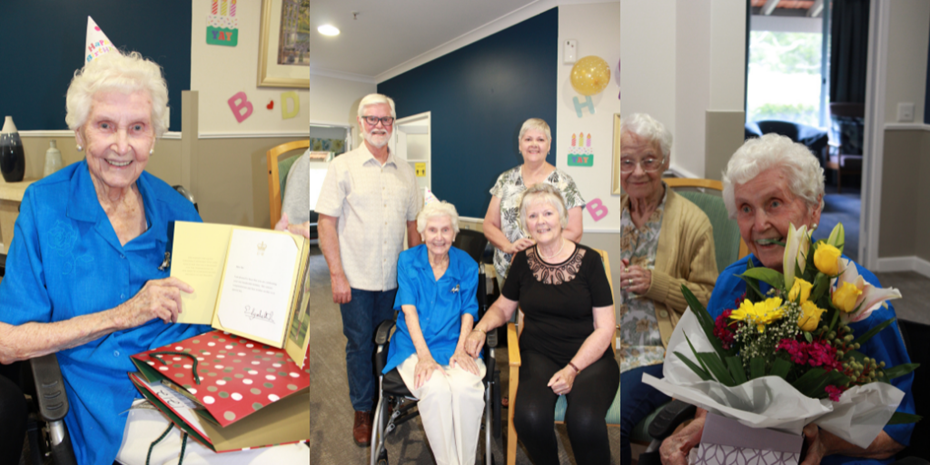 Until moving to South Lake, Amy had been living at home, so her birthday was an opportunity for her new South Lake friends to throw her a special party – which included cake, party hats and lots of yummy food.

Amy was born Amy Parker on the 14th December 1921. She was born into a pioneering Western Australian family who came to WA from England in 1830.

Her early years were spent in the Pilbara where her parents were pastoralists and she received her early education on a sheep station in Nullagine.

At the age of 9, Amy was sent to boarding school. After school she studied secretarial studies at a Business College in Perth. She was employed by the ABC and became the State Manager’s personal assistant.

During the war years, Amy joined the Royal Australian Airforce. She was based in Melbourne and gained the rank of Sergeant. Amy worked as a cryptographer – decoding messages – during her time with the Airforce!

It was during this time that Amy met and married her late husband, Ian Orr. They went onto have 3 children – John, Margaret and Alison – and she also has 6 grandchildren and 6 great-grandchildren.

Amy has been avid golfer – and keeping active and eating well – are what she attributes to her long life. Congratulations Amy on your wonderful milestone birthday!